Theft is a strong word. It requires two things, desire and a lack of consent. One party desires something from another and takes it without their consent. Simple. My current project is developing an understanding of macroeconomics based on a formal aggregation of microeconomics. I did not anticipate the understanding that I found. This last weekend I worked on understanding claims against wealth inequality. I began by looking at the distribution of income derived form the Average Wage Index (AWI) from 1990-2012. Plotted on a Log-Log scale the distribution appeared to follow a canonical distribution Figure 1. 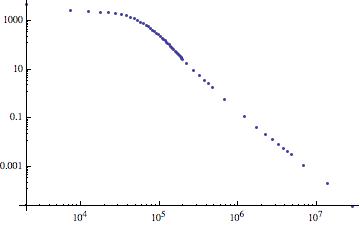 Intrigued and following a tip off, I went back and reread a good chunk of Gibbs Elementary Principles in Statistical Mechanics. On page 92-93, I found that after a change of variables from the internal coordinate system of

to an extensive variable

that the canonical distribution of the kinetic energy follows,

Using this density function and assuming that all of wages earned went to action, no savings, and the analogy of wages as expressing individual action, I found that (1) represented the distribution of income quite well for incomes less than $200,000 in 2012, Figure 2. This divergence can be explained in several ways and I have no ability to say quantitatively that one group is disadvantaged over another. A simple explanation is that the savings rate of the higher income individuals is significantly higher than that of lower income individuals. Because my assumption of zero savings is not accurate this is perhaps the simplest explanation. Another narrative would be of class warfare. I do not think this is warranted. I firmly hold that individuals are equal, this means that we each maximize our freedom based on the constraints we are given. If we were to replace individuals form one “class” to another providing each of them with the same path, just with different DNA, that they would respond in the exact same manner as the individual they replaced. Thus if we are to lament income inequality, the real problem is that of the constraints that we provide one group over another. I prefer to look at this as removing barriers to entry and allowing everyone equal opportunity to fail–that no one group should receive any special preference. Success is a reward for prudent risk, failure is the consequence of not succeeding. There must be a symmetry of risk-reward. This is the only approach that maximizes the entropy of the system. 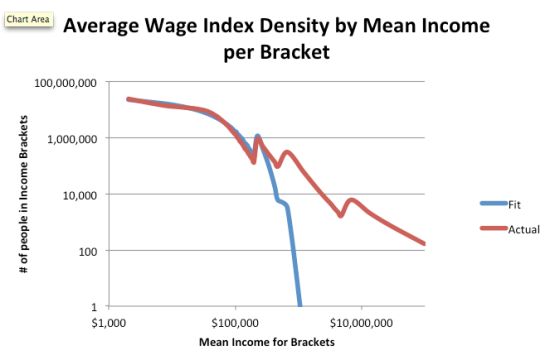 Armed now with an estimated temperature of 99% of the population, I fit the number of individuals in each income bracket to the density of individuals in the same bracket by integrating (1) over the each bracket. United States macro data shows the results of the regression for each year (

employed workers, the money supply M2, and the Energy Price index. The energy price index is used to adjust from the nominal dollars of the regressed temperature, to a measurably consistent quantity that is easy to compute, hard to manipulate, and representative of the quantity of action in the economy. The temperature,

We then use the relationship,

to compute the marginal utility of money,

. This is a polytropic process with

. We clearly see that the economy has had wealth removed. The process that we observed from 1990-2012 is that of a polytropic expansion. Where stored utility (wealth) was extracted by expansion of the money supply. This wealth extraction caused an overall cooling of the economy, except for 2012, where the drastically reduced prices of natural gas allowed more action, Figure 4.

These findings yield a powerful relationship, where we can measure the temperature of the economy with the money supply,

, and the number of employed workers,

, through the following relationship:

The impact of quantitative easing is chilling and represents the single largest wealth transfer from the poor and middle class. This even manifests in individual freedom,

. We have seen a steady decline in the individual degrees of freedom from highs of 0.896 in the early 1990’s to 0.856 today. We are as a society measurable less free than we were twenty years ago.

The loss of freedom is where the real danger is today. We have two separate distributions of individuals within our society, where one is becoming less and less free. This is the cause of revolutions. It is to a large extent brought on by inflation. Our fiscal and monetary policy is destroying our nation and tearing us apart. Since 2000, our money has lost almost 3x its original value. This loss has stabilized since 2008. Here I think, we are seeing the exportation of dollars causing inflation in other parts of the world. Our money supply is restricted because of the export, we are/were the cleanest shirt. Once this changes, and the dollar no longer seen as a safe store of value, we are at risk of serious inflation.

Our leaders, whom we trusted, are either incompetent or are structuring the game to their benefit. I understand where the TEA Party and Occupy get their anger. It is justified. We are being robbed by the men we trusted to govern. Here I harbor no ill against the bankers, while they are facilitating/enabling the theft, they are only responding to the constraints they face. They are protected and not allowed to fail, by our government. The problem is with the systemic constraints and the fundamental constraints on our society are put in place by government. In turn, government is supposed to be constrained by the Constitution. It is our responsibility to enforce governmental restraint.

Fortunately for us we have more choices than just voting at the ballot box. We have whole sets of other spaces where we can choose to act. We do not have to act within the world of fiat currency controlled by unrestrained government. We can act in currency such as bitcoin, gold and silver. Transferring what wealth we have left and our vital action into this new space frees us form an unstable system. It is time to walk away. It is time to have to consciously pay your taxes. Government can no longer passively take your wealth and time if you do this. They are left with pure acts of force and your conscious response to that force. We show the thieves for what they are, thugs. By denying them access to our action we starve them of their sustenance.

I am not provoking a revolution. I do not want one. All I am asking is that you make a decision. Have you had enough?